Thanks to its interdisciplinary composition and its crossing over approach between European Studies and Border Studies, it will proceed with an exchange of knowledge and practices on 5 models of border management in the EU:

–          the border between France-Belgium and the fortress border UK-France

–          the invisible border between Ireland and Northern Ireland,

–          the model border of minority integration between Denmark and Germany

–          the dialectical (open-closed) border between Rumania and Hungary

Each member of the network will carry out a place based analysis of its border. The network will then proceed with a comparative analysis with the Canada/US border to evaluate whether the European models are specific or whether they could be transposed to other regions in the world.

The France-German border of reconciliation

The purpose of this seminar is to study the French/German border as a place of reconciliation and a force in terms of European integration. It will particularly concern the way the 2 cross border spaces, on the one hand the Upper Rhine (France, Germany and Switzerland) and on the other hand the Great Region (Germany, Luxembourg, France, Belgium) can be leaded, organised and how the people live it. It will also touch on the project of a new Elysée Treaty in order to complete the binational French/German couple by a local transborder level through the example of the already existing Euro district. 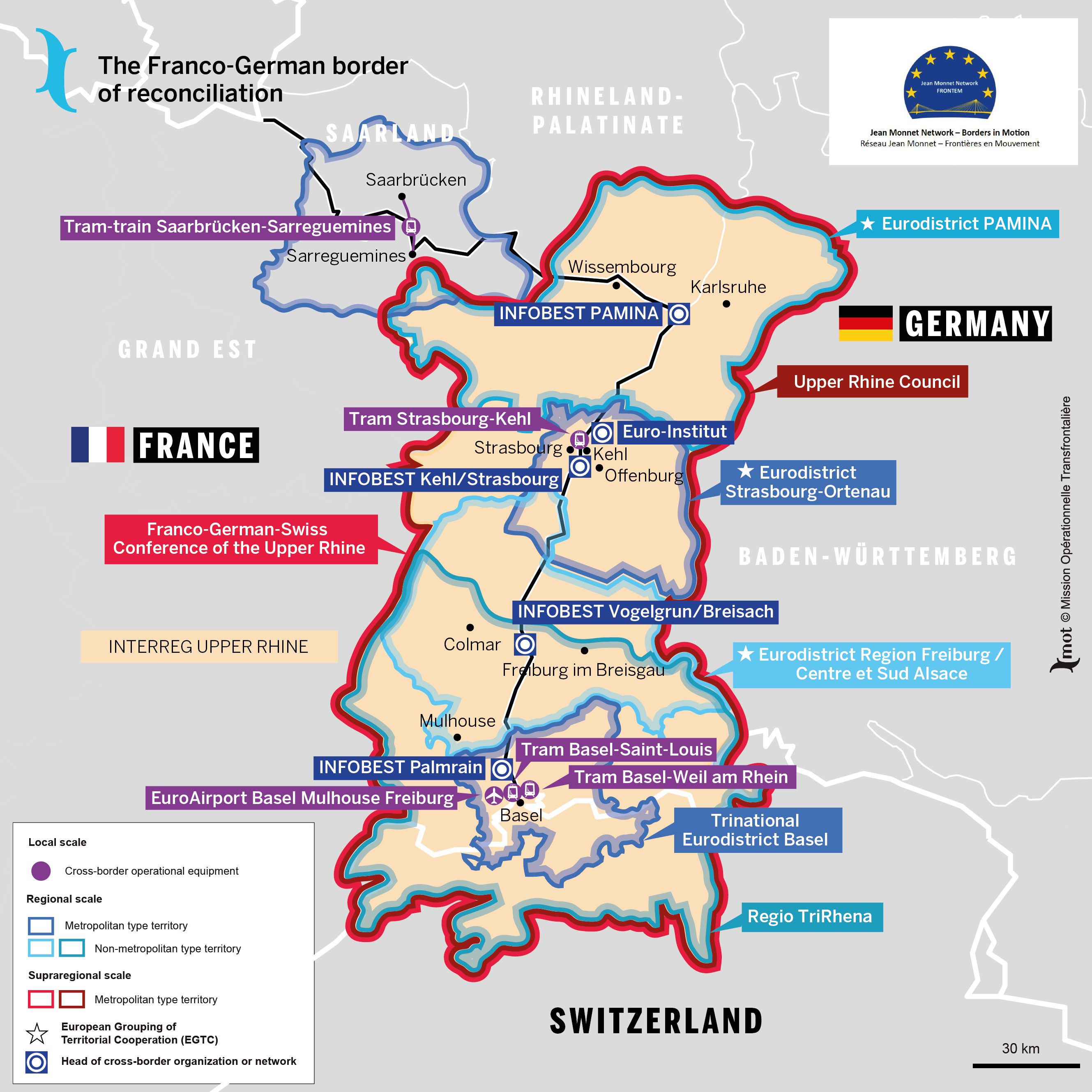 The border between France-Belgium and the fortress border UK-France

This seminar examines the complexity of the Schengen border between France and the UK. It takes into account both the security and migration issues at the border and their impact on the Brexit issue, but also the need for the function of this border as a resource to channel economic flows and exchanges. 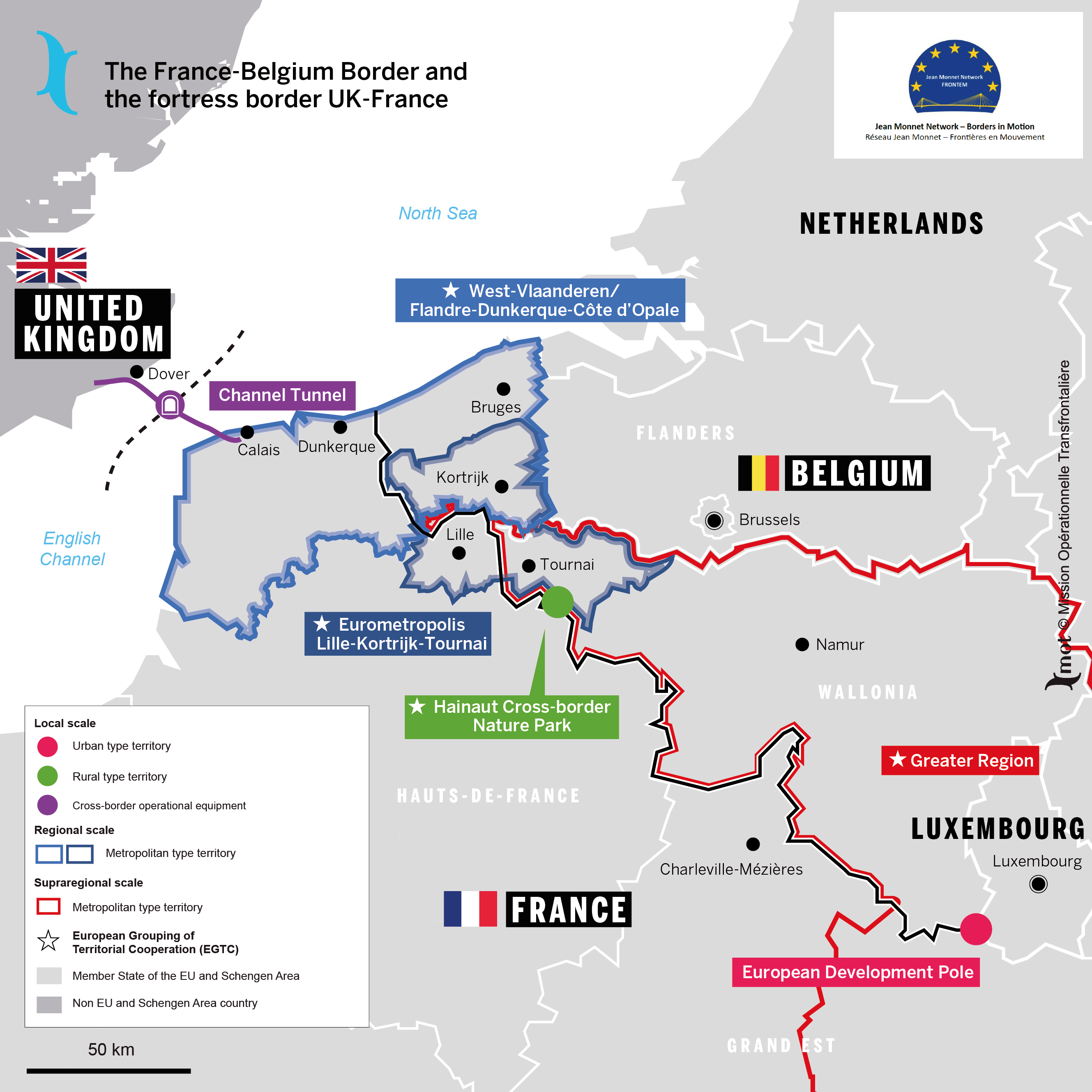 The invisible border between Ireland and Northern Ireland

This seminar deals with the questioning of the « invisible » border between Northern Ireland and Ireland. European integration as a means of pacifying a political border conflict, supported by EU support programs (Peace) of the Northern Ireland peace process is challenged by the Brexit and requires a reflection on the management of a « new » EU border. This case study also raises the question of a differentially managed Europe at the borders. 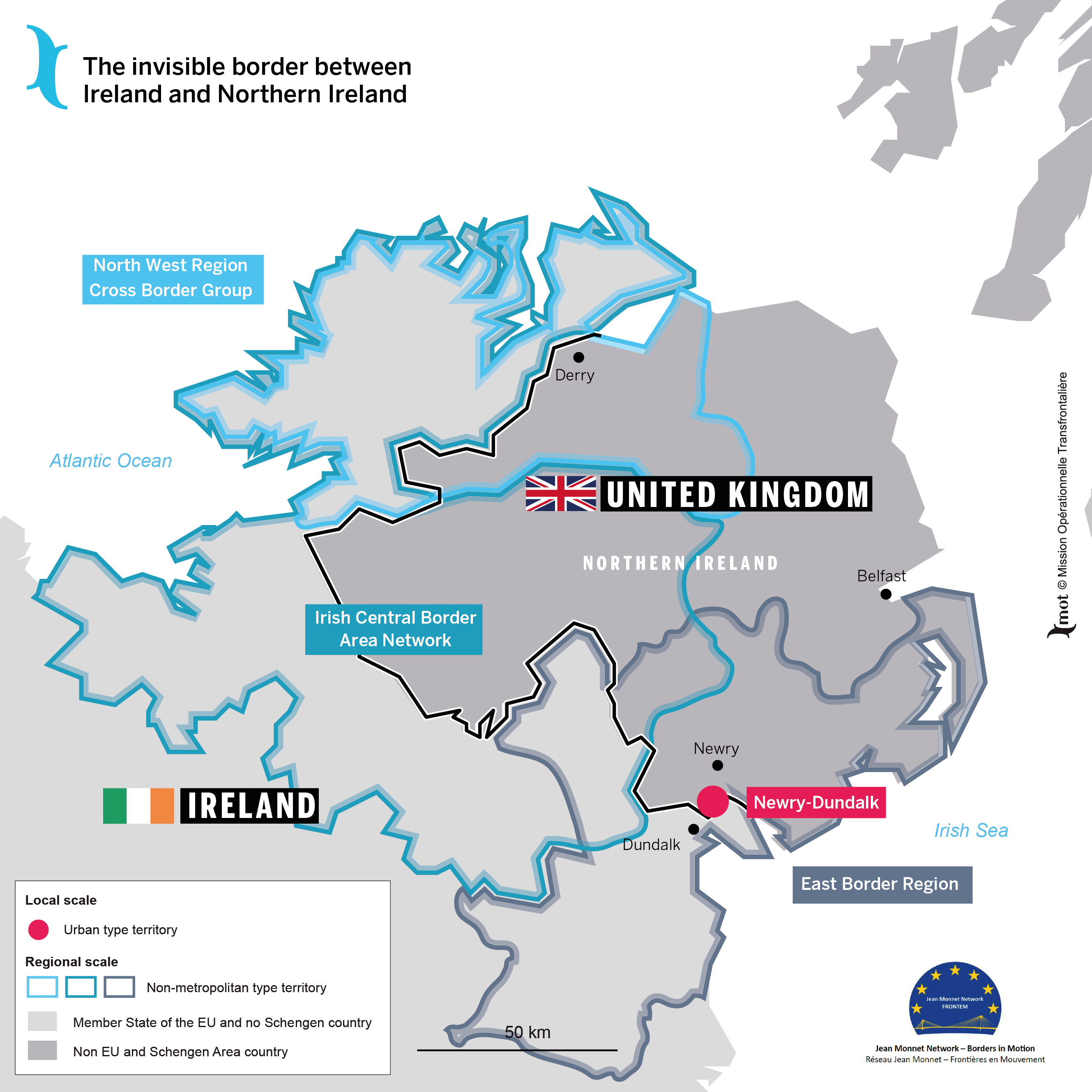 The model border of minority integration between Denmark and Germany

The seminar deals with the border region between Denmark and Germany, which is generally described as a model for the management of minority issues in Europe. The seminar questions the model of respecting Danish minorities in Schleswig and German minorities in Denmark by the provision of reserved quotas in political structures and by a special consideration of cultural and linguistic minority issues in cross-border programs and projects. 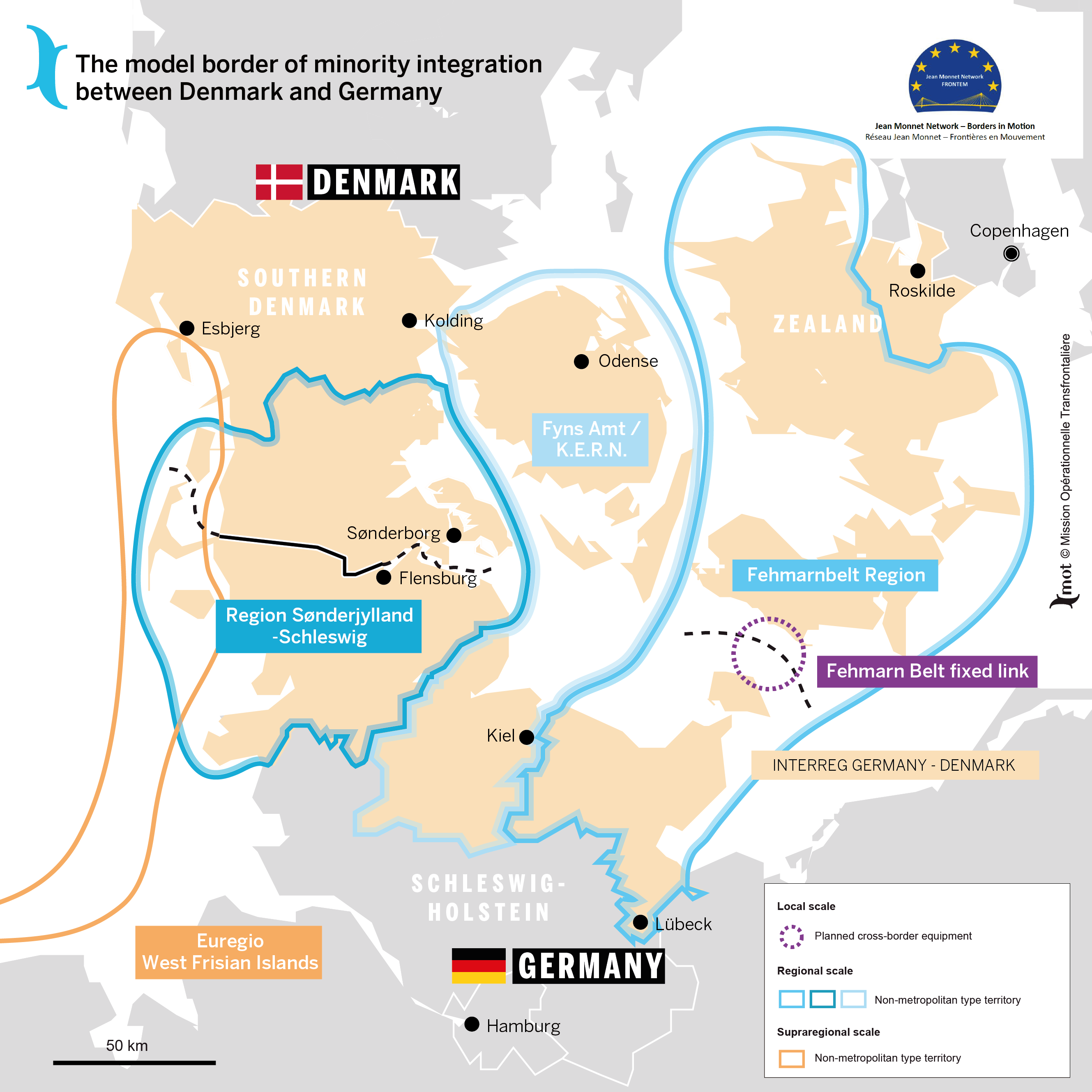 The dialectical (open-closed) border between Rumania and Hungary

The seminar analyses the dialectical role of the border in Central Europe, oscillating between closure and openness, between a place of ideological confrontation during the Cold War, a place of reunification of the European continent after the fall of the Berlin Wall in 1989, and a tool for securing the external borders of the EU after the migratory crisis of 2015. The example of the Banat border region is used to illustrate the different functions of the border between Romania and Hungary as a place of exchange and as a place of conflict (minority problems, separation during the Cold War, closure after the migration crisis, etc.). 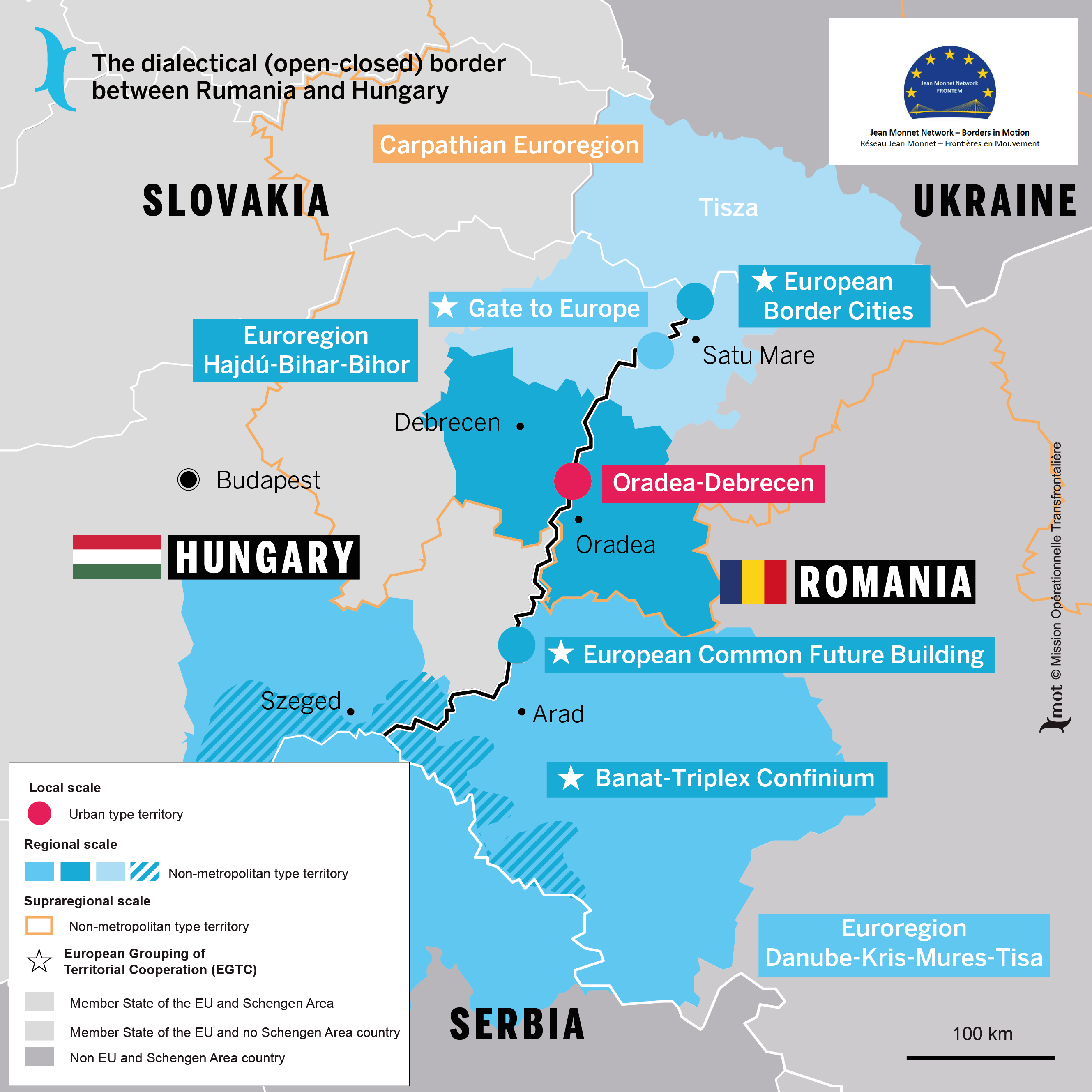 A comparative analysis with the Canada/US border

The Canadian partner has a specific function in the network: it ensures a comparative approach to EU border management models with a non-European border area throughout the project.

The seminar makes a double comparison: first, the presentation of the results of the focus groups and research seminars of the five European case studies allows a first comparison between the different models of EU border management. Second, the seminar analyses the US/Canada border model as a non-European case study and thus allows for a comparison of EU border models with those of other regions of the world. In the discussion between the network researchers, the focus is on whether the EU borders have a regional specificity or whether their models can be inspired by other models in the world or be transposed to other international border regions.