Webinar : The effects of COVID19 on the migration crisis from a comparative US-EU perspective 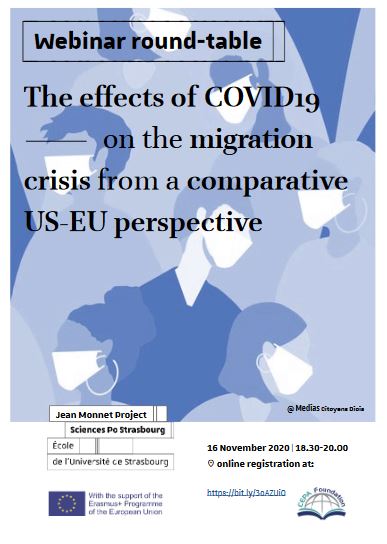 In Europe, the migration crisis, spurred off by the immense migration flow in 2015, has led to a rebordering process largely questioning the principle of a “Europe without borders” which has been propagated by the European Union (EU) ever since the ambitious project of the Single European Market in 1987. Today, the COVID19 pandemic seems to confirm this tendency, at least during the first lockdown phase from March to June 2020. It is the heart of the Schengen agreement abolishing internal border checks of EU citizens which has been at stake. The re–introduction of “border controls” in EU Member States within the Schengen space not only represents an obstacle to internal mobility within the EU but also leads to growing protectionism and a new fear of “the other” which highly threatens the potential of a welcoming policy towards migrants. But walls and fences against migrants are also one of the leading policy objectives of the Trump administration in the US. However, the wall sepertating the US from Mexico seems to draw less attention in the public debate since the COVID19 crisis. Does the pandemic stop fears of migration or does it reinforce bordering processes in Europe and in the US? This round–table will assess from a comparative EU–US perspective how COVID19 has affected the migration debate and policies on both sides of the Atlantic.